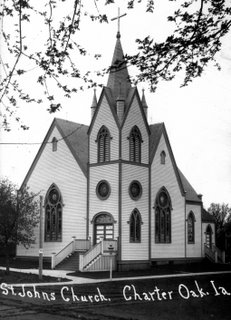 • St. John congregation, neighboring congregations, and the pastors of the Wall Lake Conference observed Rev. Amstein’s 25th Anniversary in the ministry in a festive manner on August 31, 1915. The local band also honored him.
• On the 20th Sunday after Trinity, 1916, a pipe organ was installed in the church. It was provided with two manuals and 709 pipes and its dimensions were 18 by 12 by 8 feet high. It was driven by an electric motor. 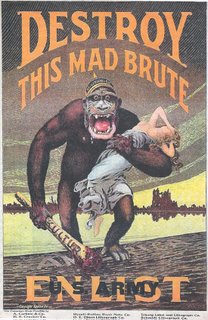 • During the years 1917-1919 (World War I) St. John was greatly harassed by such people who apparently could not and would not believe --- though ever so much testimony and ever so many proofs were offered ---that German-born people or people of German descent could be loyal citizens of the country they had chosen as their permanent home. It was tried in different ways to cast suspicion of disloyalty upon the congregation, its school and especially its young people’s society and to discountenance their manifestations of loyalty to their country. Motives were judged, injustices perpetrated. Those were troublesome days, since the members of St. John, faithful in their duties over against the government, desired nothing more than to enjoy peace with their fellowman, so desirable especially in times of national unrest.
• The congregation and its organizations were always vindicated of the charges brought against them. During this time of stress, however, the young people lost their meeting place and the school was condemned. 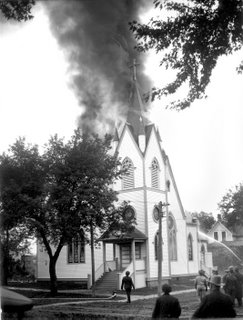 • The year 1924 will never be forgotten by those who were affiliated with St. John. On Sunday, September 28, 1924: The pastor was prepared to deliver his message to the people; the members of the congregation were getting ready to go to church or on their way. At nine o’clock or shortly thereafter the electrifying cry rang out: “The Lutheran Church is afire.” It was! In spite of every effort to subdue the flames, in 2½ hours the beautiful church lay in smoking ruins. It had been remodeled, enlarged, and redecorated, only 2 services had been conducted in it since the improvements had been completed, and now – nothing remained of it but eleven pews and the 3 statues: of Christ and of the 2 angels. (These statues are the same ones that beautify our church today). Rev. Amstein wrote concerning the event: “The entire congregation witnessed the tragic drama unfolding before their eyes. It was as if they came together for the purpose of casting a last lingering look upon their house of worship as one takes a last lingering look at a loved one, then to accompany him to his last resting place here on earth. We were much like the children of Israel, who saw their house of worship destroyed and then, in Babylon, as captives complained: ‘By the rivers of Babylon, there we sat down, yea, we wept, when we remembered Zion. We hung our harps upon the willows in the midst thereof.” The origin of the fire remains a mystery to this day. 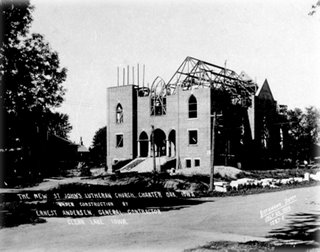 • A new church was soon built. The Ladies Aid also provided the funds to transform the basement into a large hall and kitchen. The corner stone was laid on May 24, 1925, and the church was dedicated on February 7, 1926. The weather on dedication day was ideal but the roads were almost impassable. Yet, the church, comfortably seating 650 people, was filled to capacity. (The placing of chairs and the opening of the windows leading to the rear hall made it possible to accommodate about 1,000). The total cost of the church was $62,000.00.
• In August 1927, the District Convention of the Iowa District of the Evangelical Lutheran Church (Missouri Synod) was held in Charter Oak. Some 400 pastors, teachers, and delegates were present. 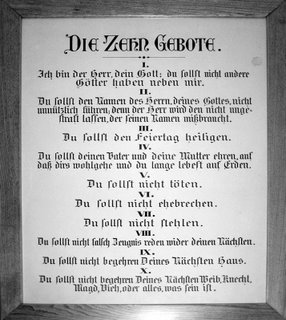 • On July 26, 1934, the congregation extended a call to the Rev. Walter P.A. Schroeder, at the time serving Grace Evangelical Lutheran Congregation of DeWitt, Iowa. After prayerfully considering the importance of the call to St. John, his congregation gave him a peaceful dismissal, which they had been reluctant to do. On September 13, 1934, Rev. Schroeder and his family arrived in Charter Oak. The following Sunday, Rev. Schroeder was installed by Rev. E. Widmann of Ute, Iowa, who had charge of the vacancy. Some 14 pastors took part in the installation service.
Posted by Ted Mallory at 2:33 PM