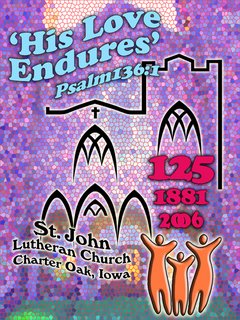 
"The purpose of history is essentially to acquaint us with the heritage of the past, to make us aware of the debt we owe to those who have gone before us, to enable us to profit from the experiences of yesterday."


This was the beginning paragraph in the 1941 Sixtieth Anniversary book, and it still applies today.

• The very first settlers of what was soon to be known as Hanover Township, Crawford County, Iowa were Lutherans hailing from the Province of Hanover, Germany. Five families settled there in the fall of 1873. Before the first winter came, they had made arrangements with Rev. G. Haar of Denison, Iowa to minister to them spiritually. Services were conducted in their homes and later in the district schoolhouses. 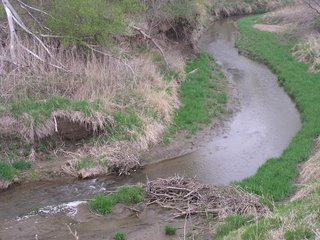 In that same decade a number of Lutheran families moved into this territory from Chicago, Illinois. Many of them had emigrated originally from Prussia, Germany. Until 1880 these families had common worship with the original pioneers.

• As a result of a controversy over the location of the contemplated church and cemetery, this group decided it was advisable and best to divide into two separate congregations. This was done with the hopes of building two separate churches in locations that the ever-increasing number of Lutheran families coming would be within easy access of a church. So, St. John Evangelical Lutheran Congregation, comprised of the Lutherans living on the south side of Soldier Creek, was organized on March 13, 1881 under the direction of Rev. G. Haar of Denison. Charter members were: Georg Neddermeyer, Christian Neddermeyer, Friedrich Bockelmann, Georg Schelm, Heinrich Kuhlmann, Georg Kuhlmann and Dietrich Vanier. Two months later the following joined the congregation: Gottfried Henning, Carl Jahn and Heinrich Schroeder. Results of the first election were Christian Neddermeyer and Gottfried Henning – Elders; Christian Neddermeyer –Treasurer; the Rev. G. Haar – Chairman and Secretary.

• Rev. G. Haar served St. John, conducting services in what was long known as Peter Timm’s schoolhouse (one-mile north and 3 miles east of what is now Charter Oak) until 1882 when he accepted a call to Grant Township Church, Ida County. From 1882 to 1889 St. John was served by Rev. C.A. Bretscher from Hanover Township, conducting services every second Sunday, first in Timm’s schoolhouse, and later in Charter Oak. During these years St. John developed rather slowly.

• The members had extreme difficulty agreeing on the exact location for their church. (Must remember the town of Charter Oak was not yet in existence). Acres were bought here and acres were bought there, only to be resold again. The problem was finally settled when the Chicago, Milwaukee and St. Paul Railroad built a line to Sioux City and established the village of Charter Oak in 1887. Several members immediately purchased 2 lots for the congregation. A third lot was presented to the congregation by the Railroad Company with the condition that a church be erected thereon within one year. Soon the members were in full agreement. 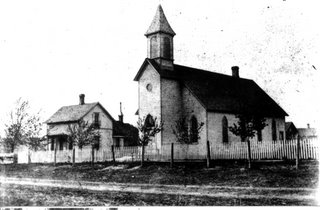 • A church was built in 1888; it was 30 by 50 feet. On October 21, 1888 the 21st Sunday after Trinity, the church was dedicated to the service of the Lord. Rev. W.T. Strobel of Denison conducted the German service in the forenoon, and Rev. M. Herrmann of Grant Township, preached the sermon in the afternoon in the language of the country. Already at this early date the American language was used by St. John Lutheran Church making known the grace of God in Christ Jesus. The church was erected at a total cost of $1,399.00. During this same year the cemetery, one mile north of Charter Oak, was purchased and laid out in lots.

• In 1892 St. John congregation joined the Evangelical Lutheran Synod of Missouri, Ohio, and other states.

• In 1902, a school was built since the schoolroom in the rear of the church had become too small to accommodate the large number of children. The dimensions of the school were 22 by 36 feet with a hall 8 by 8 feet.

• The congregation decided to erect a new church: 30 by 64 feet with an 80-foot tower. Rev. A. Amstein delivered the address on the laying of the cornerstone on July 14, 1907, in the absence of Rev. C. Wehking who was ill. The building committee consisted of Messrs. George Schelm, Carl Schreiber, Franz Riedesel and Paul Fiene. In the corner-stone prepared by Mr. Conrad Broesamle, were placed a hymn book, a catechism, history of the congregation, a copy of the current issue of the Charter Oak Times, Crawford county Demokrat, Kirchliche Nachrichten, and Der Lutheraner. After the congregation met in the City Hall for nearly a year, they rejoiced when they were able to worship in their own house on March 29, 1908, the day of dedication. The speakers were Revs. C. Runge, H. Wehking and Wm. Frese (English). Dinner and luncheon were served to all members and guests. The entire cost of this building program was $12,000.00.
Posted by Ted Mallory at 1:26 PM