A little note here from your webmaster here. I've been working on the history book between classes and at lunch. Right now I'm cleaning up the Baptism section, trying to make mile long German names fit in the two columns per page format. Names like "Alma Rosine Sophie Marie Bockelmann" from 1899. Whew, that's a mouthful. 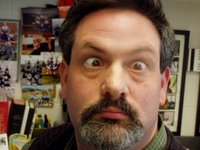 Anyay, I needed a break really bad, so I thought I'd let you know what people are saying. Mostly negative feedback. It's not that they don't like this site or it's format, they just don't see it's purpose. On the advice of one friend in the communications sphere, I'm cutting the length of a lot of the history postings. There's just so much stuff about finances or personnel changes that I thought I'd streamline it a little. My friend also thought that would be more like giving readers a taste so they'll still want to purchase a copy of the book.

Rest assured, I won't be posting 20 pages of names of baptisms, confirmations, marriages, deaths, and officers. Sorry if you're enough of a history buff or a geneologist foing research- buy the book.

There will also be TONS more photos in the book- with captions. Although some people noticed that I've added a couple pictures here and there that won't be in the book- like one of the Solder river or one of WWI anti-German propaganda.

I realize that most of our congregation's members don't even have computers, we're a small rural church who're mostly over 50. But, I've always believed that if you're not growing, you must be dying. We've recently had an influx of new members who happen to be young families with small children. And our town and it's surrounding area have quite a few new immigrants arriving too.

In theory, I could give our Pastor and secretary access and training so that they could post to this blog too. That way news items, death notices, calendars and schedules could be updated weekly. Granted, maybe that's suprrfluous if we have barely 400 members, less than 200 in regular attendance, less than 75 with internet access, so fewer than 20 who'd use it very often...but hey, I "get I.T. done." It's an area that I can use to serve the Lord & His people.

"Superflous Spirituality" sounds like a good title for a blog....

In His hands,
Ted
Posted by Ted Mallory at 9:45 AM

I read that you have been receiving mostly negative feedback and I am writing with positive feedback to balance that.

Your blogs are interesting and insightful. As a native of that area of Iowa and a relative of several members of St. John's, friend of several others, I view the history book excerpts as inspiration to connect with my roots and know more about the history I grew from. I have visited your church on many occasions throughout the years, celebrating baptisms, weddings, confirmations, and mourning the loss of loved ones. Always when I have visited I have had a sense of belonging and now as your congregation reflects on its rich history I am glad to have this connection to your celebration. Please know that I celebrate with you and hope to observe the same milestones in the same grand fashion with my own faith family in the years to come.