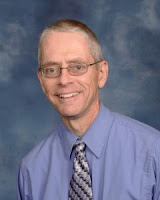 
Help Pastor Merrill help you- If you need Pastor Merrill to call or visit either your self or a family member, please call the church office:
Call either 678-3630 or 678-3312

Rev. Merrill attended St. John Lutheran School in Beloit, Wisconsin as a child. He graduated from Concordia Theological Seminary in Fort Wayne, Indiana. He served his vicarage at Trinity Lutheran Church in Cole Camp, Missouri. He served as assistant pastor at Zion Lutheran Church in Humboldt, Iowa before being Called to St. John, Charter Oak. Every summer he enjoys helping with Concordia Cubs' Week at Camp Okoboji.

Pastor Richard Merrill was born in Beloit, Wisconsin. He received a Lutheran School education at St.
John's in Beloit. After graduating from high school he attended Coe College in Cedar Rapids, Iowa, majoring in Math and Computer Science. After working for five years as a computer programmer at Grinnell College in Grinnell, Iowa, he entered Concordia Theological Seminary in Fort Wayne, Indiana, graduating in 1991. He served for 13 and a half years as assistant pastor at Zion Lutheran Church in Humboldt, Iowa, before accepting the call to be the pastor of St. John Lutheran, Charter Oak, in 2005.

Pastor Merrill was recently elected Board Secretary of Iowa District West, after serving two terms as Circuit Visitor of the Mapleton Circuit. He served as Pastoral Adviser to the Iowa District West Singles Ministry from 1993-2011. He has also served two terms as Zone Counselor for the Mapleton Zone LWML. He has been on the staff of Concordia Cub Week at Camp Okoboji since 1997, working with 9-12-year-olds as afternoon sports director and morning music leader. In his spare time, Pastor Merrill enjoys bicycling, golf, and watching sports live or on TV. He is a fan of the Chicago Cubs, Green Bay Packers, and Wisconsin Badgers. He also supports the Charter Oak Ute Bobcats and MVAOCOU Rams when his LYF kids are playing.