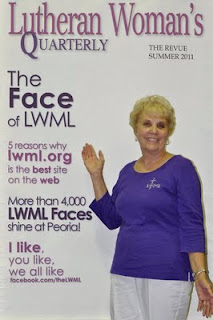 St. John members Karen Weiss (above) and Marge Neddermeyer (below- scroll down) went, along with Pastor Merrill to attend the Lutheran Women's Missionary League (LWML) National Convention in Peoria, Illinois this week, June 23-26. Weiss is the President of St. John's LWML chapter and Neddermeyer is currently serving a term as the IDW-LWML Treasurer. The convention's theme this year is "Being With Jesus — Living on the Edge" their official verse is "They realized that they had been with Jesus. 'For we cannot but speak the things which we have seen and heard.'" ~ Acts 4:13b and 20

LWML is sometimes also known as "Ladie's Aid" and "Lutheran Women in Mission." LWML serves funeral meals for grieving families at St. John and raises money and awareness for world missions. Any women of the congregation are welcome to join.

You can see what the convention is up to at their official website: http://www.lwml.org/conventions 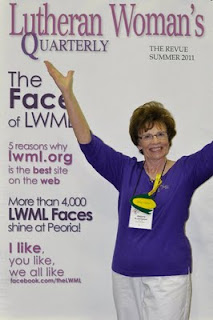