'Let the children come to me' 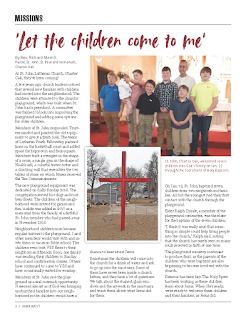 A few years ago, church leaders noticed that several new families with children had moved into the neighborhood. The children were attracted to the church’s playground, which was built when St. John had a preschool. A committee was formed to look into improving the playground and adding some options for older children.

Members of St. John responded. Trustees sanded and painted the old equipment to give it a fresh look. The teens of Lutheran Youth Fellowship painted lines on the basketball court and added space for hopscotch and four-square. Members built a swing-set in the shape of a cross, a jungle gym in the shape of Noah’s ark, a colorful teeter-totter and a climbing wall that resembles the two tables of stone on which Moses received the Ten Commandments.

The new playground equipment was dedicated on Rally Sunday 2016. The congregation served hot dogs and root beer floats. The children of the neighborhood were invited for games and fun. A slide was added in 2017 as a memorial from the family of a faithful St. John member who had passed away in November 2016.

Neighborhood children soon became regular visitors to the playground. I and other members would visit with and invite them to vacation Bible school. The children even took VBS fliers to their neighbors and friends. Soon, one family was sending their children to Sunday school and confirmation classes. Others have continued to come to VBS and have occasionally visited for worship. Members of St. John saw the playground as a real outreach opportunity. It seemed almost as if God was bringing unchurched families into our neighborhood so the children would have a chance to hear about Jesus.

Sometimes the children will come into the church for a drink of water and ask to go up into the sanctuary. Some of them have never been inside a church before, and they have a lot of questions.We talk about the stained-glass windows and the artwork in the sanctuary and teach them about what Jesus did for them.

On Jan. 12, St. John baptized seven children from two neighborhood families All but the youngest had their first contact with the church through the playground. Elder Ralph Dorale, a member of the playground committee, was the elder for the baptism of the seven children.

“I think it was really neat that something so simple could help bring people into the church,” Ralph said, noting that the church has rarely seen so many souls received in faith at one time. The playground ministry continues to produce fruit, as the parents of the children who were baptized are also beginning to become involved with the church.

Patience has been key. The Holy Spirit has been working as these children learn about Jesus. When He’s ready, we’re ready to welcome these children and their families, as Jesus did. 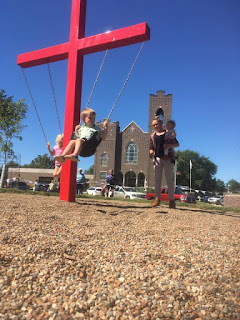 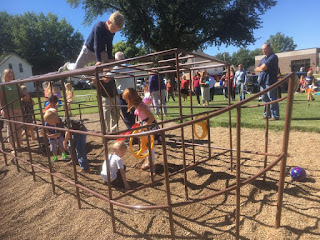