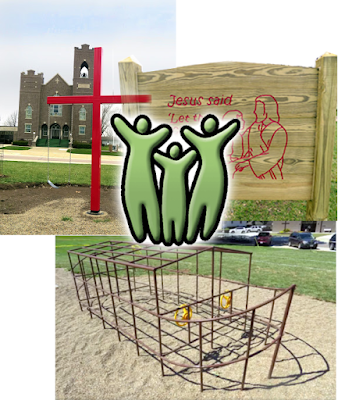 St.John Lutheran Church in Charter Oak will be hosting an open house to celebrate the re-dedication of their playground on the corners of Birch Street and First Avenue in Charter Oak on Sunday, September 11, from 11:00AM, after worship services until 1:00pm.
St.John will serve hot dogs and root beer floats and host a free throw contest on their basketball court in addition to other games and miniature train rides.
The playground re-dedication is part of St.John’s “Rally Sunday,” where they will install their Sunday School and Confirmation teachers during worship which begins at 10:00am. Children are invited to Sunday School beginning at 8:45am.
Last year, St.John members formed a committee to find ways of improving their playground. Since it was formed, St. John has cleaned and refurbished existing equipment and added new playground equipment as well as a bench, a sign and shade trees.
While the town has a school playground across from Charter Oak-Ute School and the Ortner playground at the City Park, North of highway 141, St.John members hope to provide a safe place to play for children on the West side of Charter Oak. Many kids have already begun to enjoy the new equipment this Summer, especially before and after St.John’s Vacation Bible School in early August.
Members Bob & Annie Kroll built and installed a sign at the entrance to the playground. Annie, a master gardener, selected two young oak trees for the playground that were planted by the committee on either side of a new swing set in the shape of a cross, built and installed by Adam Dorale and his family.
This Spring, Adam’s father Ralph designed a monkey-bar, climbing set in the shape of Noah’s Ark. The ark is a nod to the Noah’s Ark Pre-School once held in the old Lutheran school building on the site of the current playground. Dorale will be installing a teeter-totter before the open house and has plans for a climbing wall in the shape of the Ten-Commandments.


Originally the playground was part of the Lutheran elementary school, then Noah’s Ark Pre-School. Much of the original equipment, including a wooden climbing fort with a slide, bridge and sliding pole, were part of a memorial honoring Mary Schoenfeld and her daughter, Cecelia, St.John members who were killed in 1986.