This week Sunday School students read through the Old testament book of Judges chapters 6-8, where God appoints Gideon leader of Israel. God's people, like we so often do, were once again rejecting Him for other gods. And as usual, it got them in trouble. They literally had to hide from bullies (the Midianites) who stole their food.

God Himself ("the Angel of the Lord") visited Gideon, to ask him to lead a military charge. First Gideon asks God for a sign to prove He's God- God almost instantly consumes soaking wet goat meat with fire from a rock. Apparently that wasn't enough for Gideon, because when God tells him to attack the enemy, he lays out a wool fleece and asks God to cover it in dew but leave the ground around it dry. Still not convinced, he asks God to leave the fleece dry and soak the ground around it with dew.

How often do we not trust God? Do we beg for signs and proof like Gideon?

God wanted to teach Gideon to trust Him, so when they started with an army of 82,000 men, God has Gideon layoff most of his soldiers, so that his force was only 10,000. God must have REALLY wanted to make sure that the Isrealites gave Him the glory for the victory, because he cut the troops back to only 300 men, armed mostly with torches and trumpets- but the Midianites were defeated.

God promises to be with us and to protect us. Read more of His promises in Romans 8:18-37.

There's still time to make 2012 the 'Year of the Word,' ask your children what they learn about in Sunday School and look it up in the Bible yourself. God might just surprise you with the things He'll share. Then, ask your kids about what you BOTH learn! 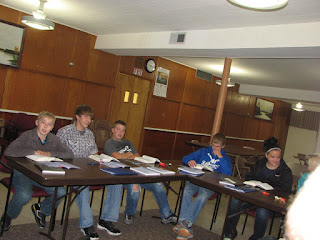 7th & 8th Graders share their "Wows, Pows, and Thank-Yous" from their prayer-journals with Sunday School Leader, Bethany Mallory in the church basement. 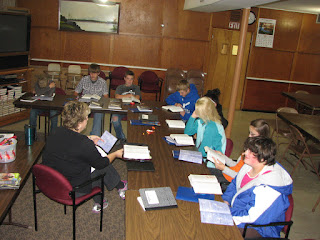